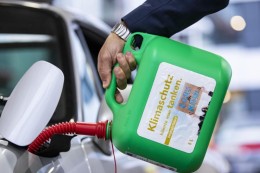 E-fuel cars are much less environmentally friendly than electric cars

“You can fill up on climate protection” – according to a new study, this sentence is rather misleading.

By 2035, the internal combustion engine is threatened with extinction in Europe. Some now hope that at least synthetic fuels can continue to be used. But how environmentally friendly are e-fuels really?

This is the result of a study by the expert panel Transportation and Environment (T&E). T&E is the umbrella organization of 53 European non-governmental organizations that promote sustainable transport, including the Verkehrsclub Deutschland.

The study calculated the total life cycle emissions of cars purchased in 2030, including manufacturing and operation. A vehicle running on a mix of e-fuel and gasoline reduces its emissions by just 5 percent compared to conventional fuel.

On the other hand, an electric vehicle that is only powered by batteries and electric motors causes 78 percent fewer emissions over its life cycle than an internal combustion engine. The calculation basis for the CO2 footprint in the manufacture and operation of battery cars was the average EU electricity mix forecast for 2030.

The analysis shows that a vehicle that runs on pure e-fuel from renewable electricity also causes more emissions over its life cycle than an electric car. An electric vehicle will be 53 percent cleaner than a synthetic fuel internal combustion engine. This is mainly due to losses in e-fuel production and inefficient combustion engines.

According to the analysis, a battery-electric Volkswagen ID.3 gets five times further than an e-fuel powered VW Golf with the same amount of renewable energy. A BMW i4 with a combustion engine can drive six times as much as a BMW 4 Series.

T&E is thus opposing the advocates of artificially produced e-fuel and fighting against a complete phase-out of combustion engines. They see the use of e-fuels as a viable option, especially for areas where there isn’t enough green electricity to run the business and there isn’t enough revenue to buy a new EV. For example, the FDP rejects a ban on the sale of new cars with combustion engines from 2035 at EU level. Liberals are demanding that vehicles with combustion engines be allowed to be re-registered after 2035 if it can be shown that they can only be refueled with e-fuel.

America’s middle class is deteriorating. The death of Roe will make it worse.

‘Shopping is a nightmare’: how ADHD affects people’s spending habits